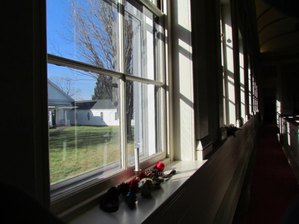 Under the direction of our Trustees, First Parish employs a part-time social worker to coordinate and administer three funds to benefit the citizens of the Town of Milton and a fourth fund to benefit members of First Parish in times of need. These funds are possible because of the generous gifts left by First Parish members and friends.

The Milton Residents Fund
Each year, available interest income and gifts to the fund are distributed to Milton residents, as needed, primarily to prevent utility shutoffs, to prevent eviction, and promote safe and stable housing.  Self-referrals and referrals from local agencies serving Milton residents are welcome.

The Parish Members Fund
Each year, available income from the fund is distributed to First Parish members in need, usually on a quarterly basis. Referrals to the fund are usually self-referrals and are strictly confidential.

The Henry B. Martin Fund and The Swift Charity
The Martin-Swift Funds provide quarterly grants to aid Milton residents and families.

Learn more about the history of these funds below.

Seeking Assistance
Noreen Dolan, Fund Coordinator, is a licensed social worker and will be happy to discuss any application for assistance. Applicants meet with Noreen for an interview and a financial review. It should be noted that eligibility is not determined strictly by income; each referral is considered by an individual’s or family’s situation. The Trustees are responsible for making final decisions on eligibility and levels of assistance.

History of the Funds

The Milton Residents Fund and The Parish Members Fund

These two funds are comprised of gifts left by members and friends of First Parish, and through contributions from local organizations such as the Copeland Family Foundation and the Governor Stoughton Charitable Fund.  Contributions and bequests are encouraged, as no portion of the annual budget drive goes to these funds unless specifically designated.

Before 1930, about twelve funds had been established to help Milton residents or parish members. In 1950, a large gift was left, and the Trustees eventually combined all the funds to make these two larger funds.

The Henry B. Martin Fund, Inc.

Henry and Eleanor raised two children, Waldo Martin and Eleanor P. Martin. Eleanor P. attended First Parish, and appointed others from First Parish to be on the board of the charitable corporation she formed in her father’s memory in 1937, The Henry B. Martin Home for Aged Persons. To fund the corporation, she donated two homes on Maple Street and money bequeathed to her by her father. The Home operated for approximately fourteen years.

In 1951, the name of the Charity was changed to The Henry B. Martin Fund, Inc. and eventually the Home was closed. In 1954, both parcels were sold to the Massachusetts Audubon Society. It appears that Eleanor initiated both the closing of the Home and the changing of the purposes of the fund. Because the government began giving increased funds to elderly people, it was thought that younger citizens and children could benefit from the fund. This tradition of giving grants to Milton residents without regard to age
continues to this day.

A service was held at First Parish at the time of Eleanor P’s death, at age 86, in 1956. Her estate was evenly divided between the Henry B. Martin Fund and Milton Hospital.

The Swift Charity was the result of bequests made in the wills of sisters Elizabeth R and Mary F Swift of Milton. Their funerals, in 1896 and 1894 respectively, were held at First Parish. A special act passed by the legislature in 1898 formally established the Swift Charity as a nonprofit corporation. The charity was directed to either purchase a home or create a trust to assist needy and deserving women and children of Milton.

Sunday Worship
10:30 am in the meetinghouse.

Silent Prayer & Meditation
9:00am in the Children's Church.

Meetinghouse Choir Rehearsal
8:45am in the Parish Hall

You have successfully subscribed!